Today we’re joined by Benedict Patrick, author of The Flight of the Darkstar Dragon and the Yarnsworld series. Keep scrolling to learn more about his thoughts on self-publishing, his writing process, and what he believes makes for a good story. 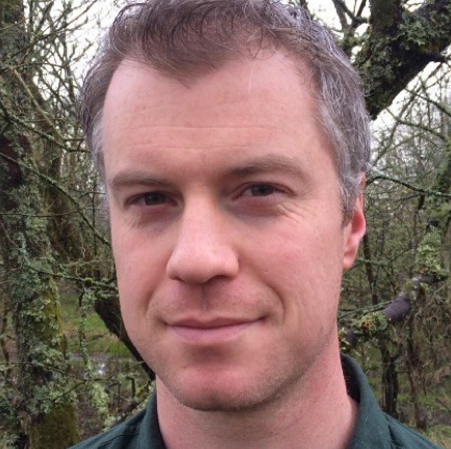 I’m from a small town in Northern Ireland called Banbridge, but have been living and working in Scotland since I moved here at the age of eighteen. Tragically, that was quite a while ago.

I’ve been writing for most of my life, and have been reading for pretty much all of it (with help from mum and dad at the beginning). My life changed when a substitute primary school teacher read my class part of The Hobbit and I asked him for a lend of the book – I fell in love with the fantasy genre and never looked back.

Hapless geek whose mind spends too much time off-world.

Neil Gaiman is an obvious first – I love his Sandman comics, and his short story collection Smoke & Mirrors really helped to demystify the role of a writer for me – he spends some time before each tale explaining their origin.

I love fairy tales and folklore, particularly how mutable they are – everyone seems to know slightly different versions of even the most famous folktales. As a conversation starter, try asking people exactly what happens at the end of Little Red Riding Hood – eyes often open (for the record, my answer is the scissors-stomach-rocks-river scenario; you can imagine the look on my primary teacher’s face when I shared that one with the class).

I love the control! Getting to work with Jenny, my cover designer, is one of the best parts of the job, and one I would not get to experience at all if I published via the traditional method. I’ve had a taste of this recently with the up-and-coming audiobooks from Podium Audio – it feels odd to be so hands-off with a Yarnsworld project (but the results have been amazing none-the-less – I recently got to hear the first audiobook, and Derek Perkins’ narration is spellbinding).

I don’t know if I’m a particularly GOOD indie publisher, so I don’t think I have an area I would say I excel in – I guess I’m lucky enough to keep putting out books that my readers seem to enjoy. As I’m sure many will claim this month, I find the marketing a struggle. I’ve recently ramped up my advertising game, and find myself checking my sales page a lot more often now that there’s a daily target the books have to make to validate what I’m spending on ads. That feeling is not a fun one.

What does your daily writing process look like? What do you do to get in the writing zone? How many hours do you write or do you go for a word count? Tell us everything!

Like many writers, not just indie authors, writing is not yet my full time job, so much of my work is squeezed into gaps I can find in the day – ten minutes before work starts, on lunch break, when the kids go to bed at night. The trick, I find, is to spend the time in between THINKING about what is coming next – that, coupled with the panic of having a small window of time to actually get words on the page, helps the fingers to race across the keyboard.

When writing a first draft, I try to hit at least 1k words a day, hoping to get closer to 2k. These words form sentences that are often horrific abominations from the pit, but I use the second and third (and fourth and fifth) drafts to dress these monstrosities up in frilly frocks, so they are eventually fit to parade in polite society.

I find my writing sessions run much smoother if I have some kind of white noise going in the background, like www.raining.fm, or a good computer game soundtrack. Anything from Supergiant Games works a treat.

You need a boy. And sometimes a girl. If they have a banjo, that is great – everyone loves banjos, right? And some kind of cute animal, like a… caterpillar? But then the caterpillar goes into its cocoon, and something goes wrong; the boy passes out, the colour in his cheeks start to fade, just as the red veins under the surface of the cocoon become more vibrant. And then the voices start, and the mouths start opening in places you didn’t expect to find mouths in, and then it all goes to shit…

I think a decent story needs some hints of familiarity, a sense of wonder, and some waking-in-the-middle-of-the-night-in-a-cold-sweat-inducing danger and threat.

At the behest of some of my colleagues (Dyrk Ashton and Robin and Michael Sullivan in particular), I ran my first Kickstarter campaign recently, and it went much better than I had expected. I’m going to be exploring Kickstarter much more thoroughly in the future, to see exactly what opportunities are available there.

Also, the new readers I gained from Kickstarter are some of the best human beings I’ve come into touch with since starting this writing gig – their passion for new stories is inspirational.

(Checks no one is stopping me, rolls dice again)

Queens of the Wyrd, because of superhero viking moms

(Door opens, bouncers enter, quickly rolls dice before they can reach me)

Spinning Silver, if you listen to the UK version of the audiobook, because Katie Sobie’s voice is haunting

(Am wrestled to the ground, but manage to kick dice one last time as I am pulled from the room)

The Rage of Dragons, because it is awesome

I think this depends on what draws me to a story. If a great plot idea comes to mind first, before I start I have to work out who the characters are, and what on earth (or, you know, what passes for earth) would get them into the invariably weird positions I want them to be in.

Things are a bit easier if an intriguing character comes to mind first – they tend to get themselves into trouble without me having to lift a finger. Hello, Crazy Raccoon.

Maybe? Sometimes? I’m definitely a lot more confident in my writing than I was five years ago, mainly because I know now there are people out there that like what I do. Not everyone does, mind – I’ve no illusions about that, and that’s okay – but enough have left positive reviews, or have reached out to me personally, to help me move beyond the whole imposter syndrome issue.

Most of the time.

Judging by my reaction to reading this question, it makes me roll my eyes. The phrase ‘literacy success’ seems to suggest someone whose work pulls in the awards, who is signing multiple book and film deals. That would be nice, of course, but I think it is a bit unrealistic for most writers.

Would l like to be able to support myself and my family through only my writing? I would definitely class that as a ‘success’, but I don’t know if that is realistic for many (most?) writers out there either, and for a while shooting for that particular goal was resulting in a less than healthy mental state.

I am able to write one or two books a year. I’ve got a dedicated group of amazing readers who enjoy what I put out there. I’ve made some close friends along the way.

That’s pretty successful too, right? I think sometimes we can aim too high, and rob ourselves of the joy of what we are achieving right now. I’m pretty happy with where things have gone since ‘Mostly’ came out.

Still going to keep investigating that Kickstarter, though, so who knows…