Today we’re joined by Deck Matthews, author of The Riven Realm and Varkas Tales series. Keep scrolling to learn more about his thoughts on self-publishing, his writing process, and a few under-appreciated novels he things you should check out. 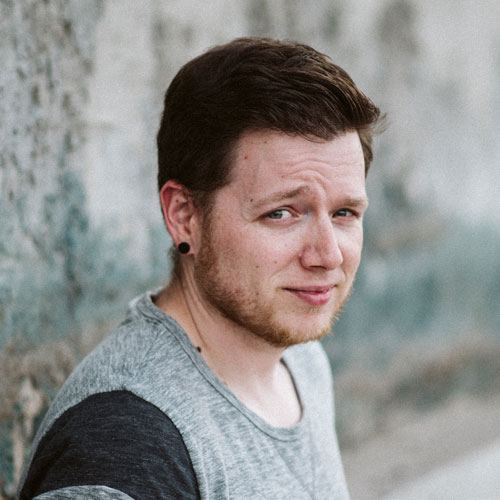 Deck Matthews is a pseudonym for one particular Matthew Ward. He is a life-long reader who fell in love with writing and fantasy in middle school. He remains an avid reader, a casual gamer and a dabbler in the visual arts. He has worked as a designer and currently spends his days neck-deep in code as a front-end web developer.

He also holds a Master’s degree in English Literature and currently resides in Ottawa, Canada with his wife, two daughters and one little fluff ball of a dog named Wicket.

Quiet introvert who loves stories of heroism and the fantastic.

All kinds of things can influence me. Obviously, I’ve been inspired by various books in the fantasy genre—ranging from classics like The Lord of the Rings and The Sword of Shannara, right through to contemporary works like The Powder Mage trilogy and Nicholas Eames’s Kings of the Wyld.

But I also take influence from other sources, like video games, movies, comics, music and even Biblical stories.

Influence can come in the form of an interesting juxtaposition of ideas, a turn of phrase, a story or even just a unique feeling that I’m interested in exploring.

Probably the most frustrating thing about self-publishing is just trying to stand out from the crowd. With traditional publishing, the barrier to entry is incredibly high (which is undoubtedly a huge factor in the rise of self-publishing in the first place). However, with self-publishing, that barrier is much lower, which means that the sheer volume of work published is enormous.

Trying to stand out in the crowd is tough. Some days, it can even be disheartening. And that makes events like Self-Published Fantasy Month so valuable!

Given the foregoing, I’d have to say that marketing is the one thing I struggle with the most. It’s not the sort of activity that naturally appeals to me. I can find it a real slog.

On the converse side, I do enjoy the production aspect of self-publishing. I have a background in design and currently work as a web-developer. I’m able to translate those skills into my self-publishing process. To date, I’ve done all the design on my covers, drawn my world map, coded my ebooks and laid out the interiors of my physical copies. The overall result isn’t always perfect, but I’m confident that I’m providing a well-designed, professional experience to my readers.

What does your daily writing process look like? What do you do to get in the writing zone? How many hours do you write or do you go for a word count? Tell us everything!

Every day is different. Between work, family, self-care and fluctuating energy levels, I find it challenging to maintain an exact schedule. I’ve pretty much embraced that reality. Instead of focusing on a specific routine, I try to learn from my project delivery team at work and focus on milestones.

When I’m drafting something new, I generally set a total word goal and a target date, then use the progress tracking tools in Scrivener (my writing software of choice) to determine overall progress. I’ll aim to maintain a certain daily minimum, but it’s always just a rough target. Some days, I’ll fall well short. Other days, I’ll blow past the target.

Spotify is a huge tool in my repertoire. I’m a big 90’s rock guy, but my account has really changed over the past year as I’ve started listening to a lot more orchestral music—usually stuff with pretty epic arrangements. I find the music is really helpful in focusing on writing.

I currently have one large playlist called “Fantasy Writing,” but one of my goals for 2021 will be to break it down a bit more into playlists based more on the mood of the scene I’m crafting.

Beyond that, my process involves a lot of editing. Each book probably goes through upwards of seven rounds of revision, ranging from larger structural edits through line-edits and proofreading.

Great question. I’m going to drop a couple here. First up: Furies of Calderon by Jim Butcher. Butcher gets a lot of attention for his Dresden Files books, but as someone who much prefers secondary world fantasy, I’ve always preferred the entire Codex Aleara series.

I feel like it deserves a bit more attention than it receives. It’s an action-packed adventure set in a remarkable world with fascinating origins. I always recommend it.

The other book that I enjoyed somewhat more recently was The Free by Brian Ruckley. It’s a standalone military fantasy about a company called The Free. Some parts of it are pretty standard fantasy fare, but I tend to enjoy that sort of thing. What stood apart for me was the magic system. In reading it, I had one of those moments where I found myself thinking: I wish I’d thought of this!

Are you a reader, and if so, which book inspired you?

Of course. In my view, reading is an essential part of my life as a writer. For many people, reading is a form of leisure. To a certain extent, it is for me, too; but it’s also a form of training. In the same way that an athlete leverages exercise and nutrition to improve at their sport, reading helps me hone my craft.

As I read, I’m paying attention to diction, dialogue, pacing, structure (both sentence and plot), imagery and juxtaposition. I try to absorb everything I can and use it to improve my own craft.

As such, I’d say that every book inspires me in some way. There’s always something to take away and learn, even with books that I might not enjoy. If something doesn’t work for me, I can attempt to dissect that and avoid repeating that same pattern.

Of course, some books have had a greater influence on me than others. In addition to the works cited above, I generally list the writing of David Eddings, Brandon Sanderson, Joe Abercrombie and David Gemmel as being among my biggest various influences.

Do you have a set writing schedule?

As noted above, my schedule is pretty haphazard. For the most part, it’s a matter of working when I can find the time. I get up early on weekends and often try to set aside specific blocks for writing and writing-related tasks, but it’s not always possible to stick to those.

When my kids or my wife need me, that has to take precedence.

The characters. Sometimes, I’ll have a general idea for a story, but those ideas are usually pretty broad: a concept for a world or a magic system, for instance. When I start something new, I’ll often begin with some exploratory work, sitting down and just writing, letting the characters come to life and find their voices somewhat organically.

Other times, characters will just slowly form in my mind over time. For instance, I have a standalone Varkas novel that I’ve been thinking about for about a year now. With several other projects on the go, I haven’t been able to dedicate much time to writing those characters into existence, so they’ve formed mostly in my thoughts and a few notes here and there. I have some plans for the story arc, too, but ultimately the characters developed first.

Do current events affect your writing, or do you try and keep life and your stories separate?

Traditionally, not so much. I’ve just tried to focus on my world and creating stories that delight and entertain. Recently, though, I’m finding there is just so much pain and hurt and confusion in the world. I’m considering starting up a secondary project, even if it’s just as a means of exploring my own feelings and frustrations. We’ll see where that goes.