Today we’re joined by Graham Austin-King, author of The Lore of Prometheus, Faithless, and the The Riven Wyrde Saga. Keep scrolling to read about his thoughts on self-publishing, inspirations, and nefarious writing rituals. 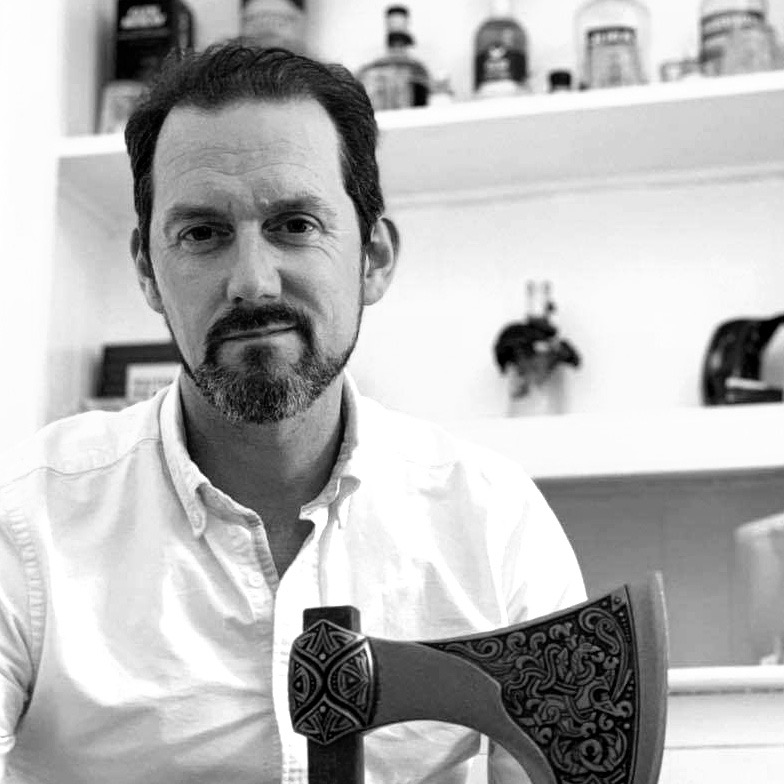 Graham Austin-King was born in the south of England and weaned on broken swords and half-forgotten spells.

A shortage of these forced him to consume fantasy novels at an ever-increasing rate, turning to computers and tabletop gaming between meals.

He experimented with writing at the beginning of an education that meandered through journalism, international relations, and law. To this day he is committed to never allowing those first efforts to reach public eyes.

After spending a decade in Canada learning what ‘cold’ really means, and being horrified by poutine, he settled once again in the UK with a seemingly endless horde of children.

To date he is the author of five novels, drawing on a foundation of literary influences ranging from David Eddings to Clive Barker.

I’m actually a failed superhero falling back on writing as a poor substitute. Also, I can’t count. And I reject rules. Ten words or less? Pfft! YOU’RE NOT THE BOSS OF ME!

What other jobs have you had besides “author” and what did you love/hate about them?

I already mentioned the superhero thing once. It brings back bad memories and takes me to a dark place. Don’t make me relive it.

I had a gig as an actor for a little while on a sci-fi show. I got punched, slapped, thrown across the room and then stabbed. Not bad for a couple of week’s work. They also somehow managed not to notice in post-production that I blinked after I was dead. Twice.

The rest of my career is mind-numbingly boring and I’m falling asleep just thinking about writing it.

I’m influenced by so many things. I grew up devouring fantasy and scifi and anything with a fantastical slant to it. I think probably my biggest influences when it comes to authors are Raymond E. Feist, Robert Jordan, and Clive Barker. Each of them, in their own way, taught me that sometimes less is more, and that’s something I like to use in my own writing. What I mean by that is that some things are better off left unexplained. I like to give my readers enough to understand the rules surrounding a magic system, or an event, and then let their imaginations fill in the blanks. I can’t imagine there are many readers out there who want to read every single strike in a fight, or every single rule in a magic system so I give them enough to fire their imaginations and let them run riot.

I like the freedom of self-publishing in that I can set my own deadlines, write to my own pace, and write whatever I like. On the flipside I hate and despise the stigma that self-publishing carries with it. The term itself is inaccurate as there are very very few authors out there who write, edit, format, and produce their own cover art for their books. There are even fewer who do it to a professional standard.

I feel I’m quite good at building a good team around me to produce a quality product. I’d like to think I’m a good writer too but then I think we are all constantly improving and learning. Where I struggle is the balancing act. Good indie publishing requires an insane amount of effort, and balancing writing, marketing, social media interaction… It’s all part of the job and I tend to fall down on doing all three at once.

First I drink an insane amount of coffee. The kind of caffeination levels that wake the dead. Then, once I’ve sacrificed a goat to the word god “Literati” (also if writing at night then a goat to “illuminati” so I can see what I’m doing) I hijack my fiancée’s desk, chair, keyboard and wrist rest. She isn’t here, she can’t argue and, most importantly can’t do anything about it (mwah ha ha.)

From there I work in blocks. I need to turn off the internet, get some good tunes going, and just rock it out for at least 30mins in a stretch. Anything less than this results in BAD words. Bad words are an occupational hazard which can bring down your entire week when reading back over your scratchings. Rumour has it they are outlawed by international convention but they don’t seem to care.

If you could set up your perfect writing space what would it look like?

We’d need three unicorns, a dragon, and the soul of a drunk faerie, and the corpse of an ent to make the desk. If you’re willing to provide those, and deal with the mess, then I’ll show you.

Words are a good start. A good story, to my mind, has to take you somewhere. It has to make you forget you’re even reading (or watching if it’s a film). It’s an inherently subjective question, some people won’t care what I care about, at the end of the day a good story needs to entertain and that’s it’s most important function.

When my school sent that letter home to my parents.

Neither, it’s the egg.

And finally, name an under-appreciated novel that you love. Let us know why we should check it out.

Last Memoria by Rachael Emma Shaw. It’s an entrant in SPFBO this year and I was really very impressed. She does some amazing things with the notion of memory and the question of it is that makes a person a person. Very cool. Get on it.