Master of Crows is a dark and captivating Fantasy Romance tale of destiny and impossible odds by author Grace Draven. The paths of a powerful outcast mage and a slave with unusual talents cross in this charming narrative, where both an ancient evil and the greed of men threaten to bring all to their knees in submission. Their foundation built upon weaved lies, will they be able to put their differences aside in order to fight the encroaching darkness? Or will Corruption prevail? Told with a perfect blend of fantasy and romance, there’s plenty of magic and peril to be found within this book’s pages as we venture on a journey of acceptance and found family.

Draven centers her story around a cast of flawlessly crafted characters led by the enigmatic Silhara of Neith and the hopeful Martise of Asher. Silhara, King of Filth, Master of Crows, is a rogue mage living on the fringes of society in his manor of decay. Powerful, indifferent, and sardonic, he suffers in silence as his will is battered to its breaking point. Martise, a slave of a Silhara’s rival, withstands the onslaught of her new master to finally be gifted the freedom she seeks. Her determination and unshakable strength are only eclipsed by her thirst for knowledge. While these two outwardly appear to lie at opposite ends of the spectrum, the more I read, the more I discovered (and admired) the similarities in their resolve. I’ve always found in stories with multiple POV characters I tend to enjoy one more than the other(s), but that isn’t the case with this duo – they complement each other in such beautiful ways to create a cohesive narrative.

The supporting cast, while relatively small, is of the utmost importance. Each character is carefully designed to play an important role in the larger picture, acting either to advance the fantastical plot or its accompanying romance. The denizens of Neith, Gurn the giant and Cael the hound, are wonderfully illustrated, initially appearing as modes of intimidation, but instead provide solace. Corruption and Cumbria are truly detestable and worthy villains, each willing to use others to attain their deepest desires. With all the fat smartly trimmed away and Draven’s planning shattering all misconceptions, these secondary characters add a wealth of volume to the story as a whole.

“Stay with me,” she repeated, her plea echoing in the hallowed places of his soul.

The legend of Silhara and Martise tells of a slow-burn romance that begins with mistrust and hidden truths and evolves into an inferno of passion. Their love is one that suffers from the balance between desire and duty, but it’s one that was foretold in the annals of the past, simmering far beneath the surface. Draven utilizes both the enemies-to-lovers and master/apprentice tropes to tell their tale, and executes both in a wonderful fashion through a displayed budding mutual respect and plenty of delicious snark. As the story continues, vulnerabilities are exposed, but rather than their relationship suffering from these cracks, it only strengthens their bond. The tension is superb. The tenderness inspiring. The steamy moments are dazzling. A true treat for those who appreciate a healthy dose of romance with their fantasy.

In addition to fantastic characterization and a superbly organic romance, the world Draven builds around us and the magic it possess are some of the most compelling aspects of this book. Vivid worldbuilding with the sharp aroma of threatening change on the winds, magical talents that thrive on and feed others, and everything in between. The visuals presented are remarkably tangible; dark cursed forests and places of power, sprawling and serene orange groves in need of nourishment baking in the warm sun, twilight dreamscapes home to a monstrous leviathan, crumbling manors, hungry spirits, and the list goes on. While we visit a myriad of places and states of consciousness, the author crafts them in such a way that makes each and every one memorable. I feel as though there are so many nooks and crannies to discover in this world, and I hope to discover them all one day.

Master of Crows was such a refreshing read for me, and despite it dipping its toes into the realm of dark fantasy, I found it to be surprisingly uplifting. I was captivated by this provocative story infused with treachery and yearning within the first few chapters, and devoured it in its entirety in under two days. If you’re one for a story of an ancient evil seeking retribution, and aren’t afraid to have your fantasy adventures steeped in adult romance, then I thoroughly suggest you give this one a try.

What would you do to win your freedom? This is the question that sets bondwoman, Martise of Asher, on a dangerous path. In exchange for her freedom, she bargains with her masters, the mage-priests of Conclave, to spy on the renegade sorcerer, Silhara of Neith. The priests want Martise to expose the sorcerer’s treachery and turn him over to Conclave justice. A risky endeavor, but one she accepts without hesitation–until she falls in love with her intended target.

Silhara of Neith, Master of Crows, is a desperate man. The god called Corruption invades his mind, seducing him with promises of limitless power if he will help it gain dominion over the world. Silhara struggles against Corruption’s influence and searches for ways to destroy the god. When Conclave sends Martise as an apprentice to help him, he knows she’s a spy. Now he fights a war on two fronts–against the god who would possess him and the apprentice who would betray him.

Mage and spy search together for a ritual that will annihilate Corruption, but in doing so, they discover secrets about each other that may damn them both. Silhara must decide if his fate, and the fate of nations, is worth the soul of the woman he has come to love, and Martise must choose continued enslavement or freedom at the cost of a man’s life. And love. 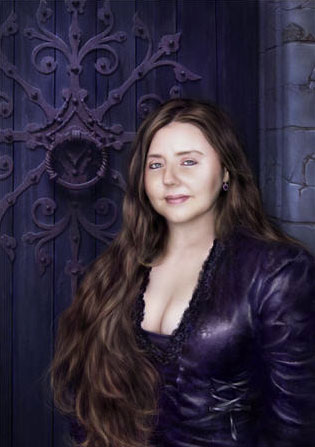 Grace Draven is a Louisiana native living in Texas with her husband, kids and a big, doofus dog. She has loved storytelling since forever and is a fan of the fictional bad boy. She is the winner of the Romantic Times Reviewers Choice for Best Fantasy Romance of 2014 and 2016, and a USA Today Bestselling author.