Review: Shadow of a Dead God by Patrick Samphire

You did it, Nik. You actually did it. No one was more surprised than me.

Shadow of a Dead God is a highly entertaining and original tale of unconditional loyalty and the dangers of greed. Author Patrick Samphire presents readers with his first foray into adult fantasy with this High Fantasy mystery laced with Noir flavors and just enough humor to keep it from teetering into the realm of the dark and gritty. What begins with a second-rate, freelance mage cramped in a pantry hunting for paltry ghosts transforms into a ghastly murder investigation hindered by an abundance of political red tape. And oh how this tape is shredded to ribbons! With beautifully crafted characters, a city so well-depicted it feels alive, and an interesting magic system, Shadow of a Dead God is lively and thoroughly enjoyable pursuit for the truth. I knew as soon as I read the blurb I’d love this book, and once I picked it up, it was just impossible for me to put down.

Where this novel truly shines is its excellent characterization. The narrator of this tale is Mennik Thorn, a snarky, self-deprecating mage living on the fringes of society. His blunt, matter-of-fact attitude and unwillingness to conform to what’s expected of him brings a new level of genuine authenticity to the mix. I love a character who doesn’t take themself too seriously, and Mennik always attempts to diffuse every dire situation he finds himself in with some awkward, misplaced humor. He’s also a master storyteller, completely immersing you with his account of events and introducing other characters in amusing ways, all while rolling with the punches – quite literally. I was able to connect with him and become fully invested in his story within the first few pages, which made reading the rest such a pleasure.

In addition to our narrator, we’re made acquainted with a perfectly constructed cast of supporting characters; each with their own unique voice and each with their own weaknesses, whether it be greed for money or power, lack of (or too much) ambition, or blind loyalty, and all playing a pivotal role. All of Mennik’s misadventures stem from a promise made to his childhood buddy Benny, a carefree thief – we all have that friend we’re willing to do anything for, regardless of the consequences that may tag along. Alongside Benny is his daughter, Sereh, a badass, psychopathic 11-year-old with a penchant for knives and blending in with the shadows. Mennik, wielder of the arcane, is terrified of this little girl, as he rightfully should be. Meroi Gale, captain of the dreaded mage-hunting Ash Guard, is stoic and dutiful, but doesn’t necessarily like to play by the rules. There’s definitely more than meets the eye there. Witnessing the finely executed interactions between these characters added such a beautiful depth to the story as a whole.

Before we dive into the world, I just wanted to quickly talk about the magic system, which I personally found to be one of the most interesting and unique ones I’ve encountered. All magic in this world is derived from the remains of dead gods. As they wither away to nothing more than a legend of the past, their powers are leeched by their surroundings, which in turn are leeched by mages. I even believe Mennik refers to mages as dung beetles, which seems a pretty accurate analogy. Even scholars (with no magical talent) continue to attempt to decipher the mysteries of theoretical magic, but some things are meant to remain hidden. In other words, “Yeah, this is how magic is created, but no one knows anything about it. Thanks for coming to my TED talk”. I very much appreciate when authors give a background into magic systems, but don’t explain each and every detail, allowing the imagination to take flight.

The city of Agatos feels alive, and not just from the essence of dead gods permeating through the streets. Samphire does a wonderful job at vividly constructing the city one building block at a time, detailed in passing. Save for a tiny bit towards the beginning, there isn’t an overflow of unnecessary exposition, creating an absorbing experience. Each district of the city has its own defining characteristics and specific breed of denizens. Crossing barriers–both district and social standing alike–causes all sorts of raised eyebrows. Want to head to the market but don’t have two shields to rub together? You better make sure you head to Penitent’s Ear if you don’t want trouble. There are so many minute details hiding in every crevice, adding more to the already rich worldbuilding. By the time I finished the book, I could feel there was much more this world had to offer, and I can’t wait to discover it all.

I don’t usually talk about the plot in my reviews, but one aspect of Agatos I found to be the most appealing was the inclusion of three high mages that control every facet of society, which can all be wrapped up into politics, trade, and crime. While the games these three play are vicious, there’s a balance, and disrupting that balance could be catastrophic. Wink wink, nudge nudge.

Shadow of a Dead God is such a fun read with a steady, flowing pace defined by a harmony between intense, bloody action and quiet (oftentimes hilarious) introspection. I can’t tell you how many times I snorted and/or laughed out loud at the ridiculous messes Mennik continuously found himself in. A mystery at its core, with layers of delicious tension and unrelenting wit weaved upon it, this story has everything I ever hope for in a riveting fantasy adventure. If you’re on the hunt for an action-packed whodunnit mystery, and aren’t afraid of a little bit o’ dismemberment, then look no further, because Shadow of a Dead God is just the one you need. I’ll be waiting with bated breath for book two, Nectar for the God.

A dead god. A brutal murder. A second-rate mage.

It was only supposed to be one little job – a simple curse-breaking for Mennik Thorn to pay back a favor to his oldest friend. But then it all blew up in his face. Now he’s been framed for a murder he didn’t commit.

So how is a second-rate mage, broke, traumatized, and with a habit of annoying the wrong people supposed to prove his innocence when everyone believes he’s guilty?

Mennik has no choice if he wants to get out of this: he is going to have to throw himself into the corrupt world of the city’s high mages, a world he fled years ago. Faced by supernatural beasts, the mage-killing Ash Guard, and a ruthless, unknown adversary, it’s going to take every trick Mennik can summon just to keep him and his friend alive.

But a new, dark power is rising in Agatos, and all that stands in its way is one damaged mage… 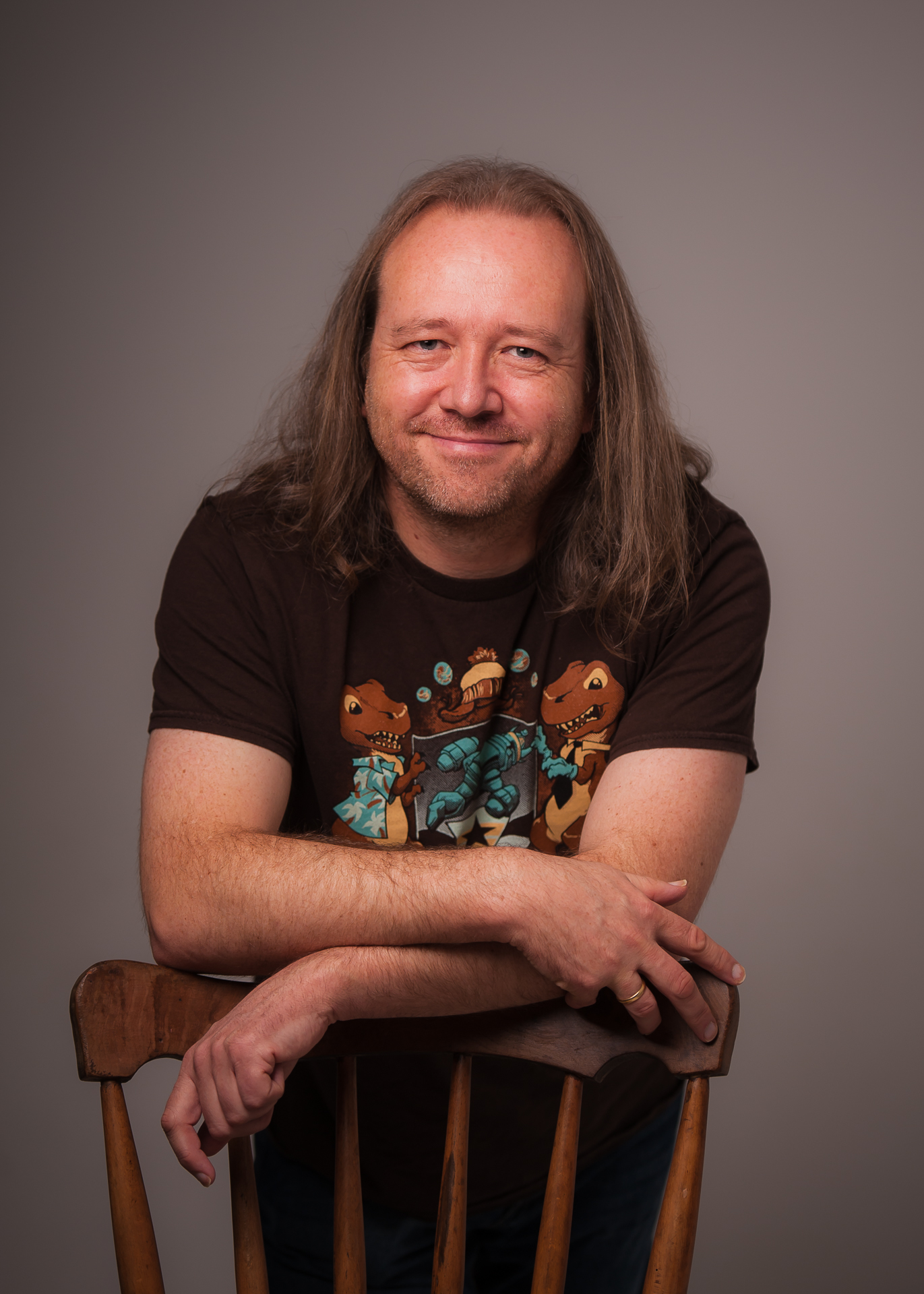 Patrick Samphire started writing when he was fourteen years old and thought it would be a good way of getting out of English lessons. It didn’t work, but he kept on writing anyway.

He has lived in Zambia, Guyana, Austria and England. He has been charged at by a buffalo and, once, when he sat on a camel, he cried. He was only a kid. Don’t make this weird.

Patrick has worked as a teacher, an editor and publisher of physics journals, a marketing minion, and a pen pusher (real job!). Now, when he’s not writing, he designs websites and book covers. He has a PhD in theoretical physics, which means that all the unlikely science in his books is actually true. Well, most of it. Well, some of it. Maybe.

Patrick now lives in Wales, U.K. with his wife, the awesome writer Stephanie Burgis, their two sons, and their cat, Pebbles. Right now, in Wales, it is almost certainly raining.

He has published almost twenty short stories and novellas in magazines and anthologies, including Realms of Fantasy, Interzone, Strange Horizons, and The Year’s Best Fantasy, as well as one fantasy novel for adults, SHADOW OF A DEAD GOD, and two novels for children, SECRETS OF THE DRAGON TOMB and THE EMPEROR OF MARS.