Review: Valley of the Free by Michael Sliter

Killing a man was easier when he was already dead.

Valley of the Free is Michael Sliter’s prequel novella in his ongoing Pandemonium Rising series. This is a tale of the paths and risks one is willing to take in the name of vengeance, a perfect storm of misinformation and ambition leading to catastrophic consequences. A beautifully portrayed character-centric story, it tells of the beginnings of Ferl’s Company, a fledgling ragtag mercenary band hellbent on a path of retribution against savage foes. But as the enemy finds new inventive ways to thoroughly break morale, secrets and lies threaten from within. As expected with Sliter’s work, Valley of the Free is as Grimdark as it gets, and manages to pack a huge punch with so little real estate space. With in-depth character building, intense action, and political maneuverings you know will shape the future of all, this novella is an excellent bite-sized morsel for both fans of the series, as well as those looking to try something new.

Sliter presents a narrative that utilizes alternating chapters of the recent past and present, steadily building up to a convergence. From the cramped confines of Fort Aurabourne to the descent into the mysterious Oshwon Valley and back again, readers follow a trail of breadcrumbs on a hunt for truth. The worldbuilding is subtle, but so very crucial, as it gives the audience a well-balanced taste of what the world has to offer. The depiction of two warring factions, one perceived as civilized, the other wild and uncultured, serves as the backbone for the intrigue and the unexpected to be fleshed out upon. This ominous adventure we embark on is ravaged by magics and atrocities that stem from a creative mind. There’s so much to take in, but each little bit is given with just the right amount of detail – nothing is wasted or left shallow, everything is flawless.

Where this book truly shines is in its characterization. While this is an account of the assembling of the company and the horrors of its first contract, this is really an introduction to characters in the established series. Readers get insight into the past of Ferl Nerial, a pretty boy noble with his eyes on glory. His cunning and resolve make him truly formidable, both as a leader and an enemy. His words and promises initially ring true, but the more you read, the more complex layers you unearth, exposing a master of manipulation. In addition to new characters, each damaged and conflicted in their own way, we also see some other familiar faces giving tiny peeks into their histories, adding a richness to a world with many discoveries to be found. Sliter has a knack for crafting superb morally gray characters that don’t all necessarily fall into that detestable realm, which is something I always appreciate in a Grimdark tale.

We, unlike all of you, are free.

Told with a simple, straightforward prose, the author tells a dark, and at times uncomfortable, no-holds-barred story highlighting the follies and disillusions of man. Flipping through the pages of this novella once again reminded me why I admire Sliter’s writing style – it’s intelligent, it’s merciless, it’s deceiving (in the best way possible). In my previous review of Solace Lost I state “[it’s] defined by its brutality and tone of utter desperation”, and Valley of the Free continues in the same vein, cohesively blending in with the main novels. Infused with perfectly executed twists and turns, this book keeps readers on their toes at all times as nothing is as it seems on the surface. It’s a story that demands your attention, digging its claws in deep, refusing to let go even after you turn the final page – and frankly, I didn’t want it to end.

Valley of the Free is a book that has been on my shelves for far too long, and one I definitely regret not reading sooner. A visceral and affecting tale of deceit wrapped up and presented in a wonderfully concise fashion, this is a perfect example of how an accompanying novella should be written. Whether you’re already familiar with Michael Sliter’s Pandemonium Rising universe, or looking to finally dive in, this is an excellent place to start. I’m very much looking forward to continuing my journey into this gorgeous and ghastly world he has crafted. If you’re a fan of Grimdark Fantasy and looking for your next read, you can’t go wrong with this one. I thoroughly recommend.

You’re scared. You should be. This is terrifying shit that we do. But, would you rather kill or die? Because that is your option!

With a quest for vengeance, Ferl Nerial finally achieves his dream—charming his way into the first sanctioned job for his mercenary company. On behalf of the newly-minted lord of Farrow’s Hold, Ferl is to put down an incursion by the free and independent nation of Oshwana. It should be an easy march, subjugating a people who defined themselves through the rejection of the niceties of modern society.The problem is… Ferl hasn’t a single follower to his name.Follow the birth of the infamous Ferl’s Company through their first ill-fated engagement against a people desperate to retain their independence and willing to do whatever it takes to do so. Visceral combat, devastating magicks, and bad decisions plague Ferl’s Company in this novella from the world of Pandemonium Rising. 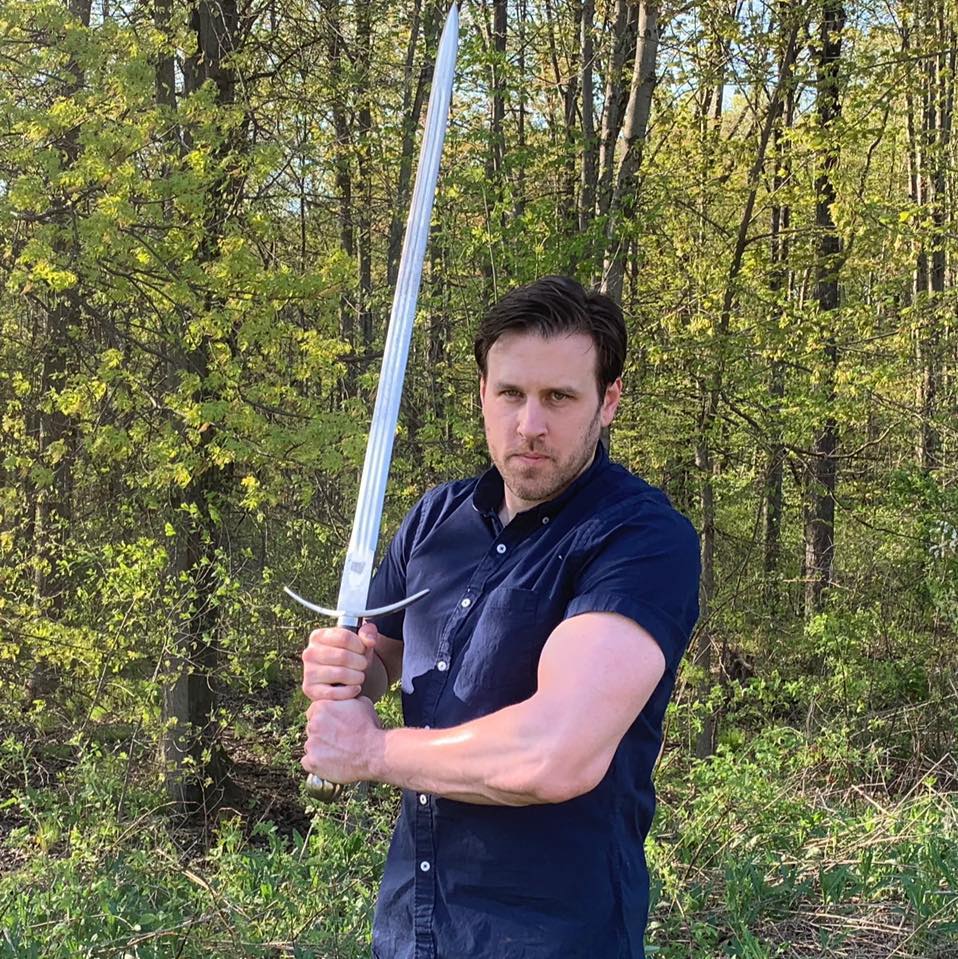 Mike Sliter is a father, husband, author, psychologist, racquetball player, and gamer with a handful of pets lurking around his house.  He is trapped in the Midwest, never able to get more than 300 miles from his birthplace and current residence near Cleveland, Ohio.  Working for a stint as a professor, he found his way into the consulting world and moonlights as a self-published author.  He is working through one massive, four-book grimdark fantasy series, Pandemonium Rising, which currently consists of two novels, SOLACE LOST and WISDOM LOST, as well as a novella called VALLEY OF THE FREE.  FAITH LOST is written and being edited at the moment, assuming Mike didn’t get distracted by something shiny in the corner.  He owns three swords, two daggers, a mace, and a variety of other medieval armaments.  You know, just in case.

Enter to win a Pandemonium Rising prize package, which includes paperback copies of Solace Lost, Wisdom Lost, and Valley of the Free!
★ International ★