When I started writing Fortune’s Fool, I wanted to it to be a big, sprawling fantasy story with magic, swords, battles, and gods. But I wanted it to be more than just a story with all the cool fantasy trappings. I wanted it also to be an emotional story of how a broken woman finds healing. And so, it slowly evolved to become a love story, too—the kind of “epic” fantasy I had once seen referred to as “Romance with a capital R.”

It might seem surprising that the person talking about fantasy stories as Romance, in the same tradition as ancient and medieval epic poems—often heavily romantic in the little r sense of the word—was Stephen King. While fantasy also includes excellent stories that zoom in on little slivers of a world, as a reader as well as a writer I like books that put everything on my plate, big stories that explore the full range of emotion and experience—not just anger, hate, and pain, but also joy, humor, friendship, and love.

That’s probably because, as a reader, I’m much less interested in plot as a series of cool or harrowing events (although I do love a good fight scene) and much more interested in story as it peels back and molds characters. Characters are shaped by external events (a good fight scene should leave a mark, after all) but mostly they’re shaped by their relationships with other characters. This is what character-driven fiction is, basically; stories with plots created by characters striving against and for each other, making decisions not just based on what a plot requires but on what they feel and think, who they’ve become as they’ve grown up in the middle of family, friends, and enemies… or conversely, how they’ve been formed if they’ve grown up alone.

Romantic love forms a hugely important part of many people’s real lives, so to ignore it in the sprawling, epic stories for which fantasy is known feels… odd to me, maybe the kind of omission writers make because they’re uncomfortable writing it… or maybe they just don’t want girl cooties. But really—watching the gruff mercenary captain or the quiet, bookish wizard woman fall in love ought to reveal something more about their characters than just what they look like with their clothes off.

Kyrra and Arsenault were heavily influenced by the character-driven romantic fantasy I read as a teenager, and in retrospect, there was a lot of it in the 80’s and 90’s—Katherine Kerr’s Deverry series (Rhodry was one of my first fictional crushes); all of Barbara Hambly’s books but especially her Starhawk and Sunwolf series, beginning with The Ladies of Mandrigyn; CJ Cherryh’s Morgaine Cycle (which you can argue isn’t a romance at all, though it felt heavily romantic to me considering the faithfulness Vanye shows to Morgaine); Alec and Seregil in Lynn Fllewelling’s Nightrunner series (okay, I wasn’t in my teens, but I couldn’t leave them out); Joan D. Vinge’s science fantasy retelling, The Snow Queen. These are all epic books, but at their core they feature a dynamic (respectful) relationship between the two main characters that grows over the course of the series.

And then, for instance, there was Jenny Waynest, Barbara Hambly’s older heroine. Jenny was the first older female main character I had ever read. She wasn’t a dried-up crone, an elderly herb woman, or a dead mother. She was a middle aged, married woman with children who took on enormously difficult quests for the love of her husband and family… and her husband did the same for her.

I think sometimes when people write off romance in fantasy as being boring or eye-rolling, what they are mainly thinking of is the kind of romances that are slapped on to a bigger plot just because the writer thinks there ought to be kissing. Or, romances that seem contrived or disturbing in the sense that everyone is angry and maybe the whole consent issue is pretty murky. Or—in a relationship between a man and a woman—the woman only seems to be there to show off how powerful/cool/amazing the male character is… or worse, to provide his motivation for revenge when she’s raped/injured/killed.

But just because these problematic stories exist doesn’t mean that they define what “romance” is and can be in fantasy. In fact, I would argue that they really, really don’t.

Indie fantasy is a wide-open field supporting a huge range of stories, and many (I would say most) of the romantic fantasy novels I’ve enjoyed in the past two years have been indie novels. If you haven’t read much romantic fantasy and you would like a place to start, here’s a short list of books that I’ve really enjoyed myself or that I have on my TBR:

Clockwork Boys/The Wonder Engine, Swordheart, Paladin’s Grace… I love all of the books Ursula Vernon writes as T. Kingfisher. Romance, fantasy, humor… Her books are massively enjoyable, and the biggest problem with them is I end up finishing them the day I buy them, usually the day they’re released. If you haven’t read much romantic fantasy, start with Clockwork Boys, which slides a little closer to the fantasy end of the spectrum; if you’re comfortable with a book more completely focused on the relationship between the main characters and you want a standalone, start with Swordheart or Paladin’s Grace. All the books are loosely linked in the same world, but only Clockwork Boys and Wonder Engine are part of the same duology.

The Heretic Gods series by Carol Park (Banebringer, Cursebreaker) — An excellent slow burn romance with an enemies to lovers plot and a female assassin you probably wouldn’t want to meet in a dark alley (I wouldn’t). Also, politics, language translation, Aztec-inspired gods, and a lot of awesome monster-fighting scenes.

The Gods of Men by Barbara Kloss– This one tied for second place in SPFBO 4 in 2018. It runs on at a breakneck pace and features another enemies to lovers romance, which only heightens the suspense of the plot.

The Half Killed by Quenby Olson. Okay, technically there’s no romance in this book. But I dare you not to find the slow development of the main characters’ relationship romantic. Olson also writes indie historical romance, and I think it shows in this dark gothic fantasy even if there isn’t any kissing.

(If you like short stories, dragons, and older female characters, try Olson’s A Slumbering Fire, which is both lovely and free.)

And… two other books still on my TBR list?

Snowspelled was a semi-finalist in SPFBO5 and Half a Soul is a participant in this year’s SPFBO6, and I’m looking forward to reading both of them. I hope you’re encouraged to try some of the romantic fantasy books on this list, too! 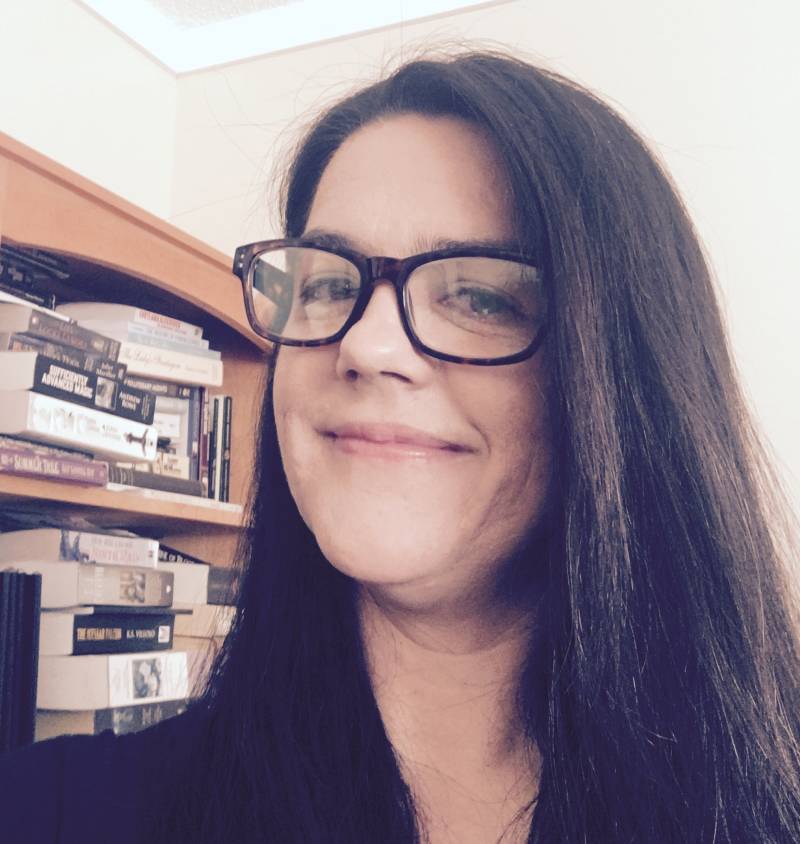 Angela Boord lives in northwest Mississippi with her husband and nine children and writes most of her stories surrounded by crayons and Nerf darts. FORTUNE’S FOOL, her debut novel, placed second in SPFBO5 in 2019. She is currently hard at work on more books in the Eterean Empire series, including SMUGGLER’S FORTUNE, a standalone which will be released later in 2020, and FOOL’S PROMISE, the sequel to Fortune’s Fool, slated for release in early 2021.