What Self-Publishing Brings to You, the Readers by Bernie Anés Paz

While speaking with some friends about my self-publishing journey and recommending the works of some other authors, one of them asked—rather bluntly—why would anyone read self-published work at all. He was curious rather than spiteful, and, honestly, it’s a good question when you think about it. With our burgeoning TBR piles and the ever-increasing size of the books and series within those lists, why stray from the vetted works of the traditional publishing side? The fact is that many still don’t, and this is without even considering the ancient (and understandable) stigma that still influences how many view self-publishing.

Well, the answer is because self and traditional publishing really aren’t two forces in opposition. They’re like freshwater and saltwater; both support similar kinds of life, but each has something unique to offer. I feel like many readers don’t understand this, which is a shame, because there are some great indie works out there that folks are missing out on, so let’s talk.

On the most basic of basic levels, self-publishing has allowed novels that might never have otherwise seen the light of day to flourish, and many of them have become traditionally published and widely enjoyed. These include books like Senlin Ascends, Rage of Dragons, We Ride the Storm, and Grey Bastards, among many others. However, the point isn’t that self-publishing allowed these authors an opportunity to choose another path (and I believe self and traditional publishing are both equally valid paths), but that it allowed these stories a chance to thrive in the first place, and that the divide between many trad and self-pub novels isn’t as wide as some might believe.

On another, and far more interesting level, is the fact that indie authors have proven themselves more likely to create cozy new genres or subgenres at the fringes of beloved ones—and have. I continuously find my fellow readers asking for something fresh and trend-breaking, so I think that’s kind of a pretty big deal, and it’s all because self-publishing allows experimentation in a way traditional publishing simply can’t risk.

The most (in)famous example of this in fantasy right now is probably the genre known as literary role-playing game (LitRPG), which combines computer and console RPG conventions with science fiction and fantasy. Some people hate it, some love it, but it’s definitely growing explosively right now, and LitRPG is even generating some of its own subgenres all while remaining something that traditional publishing has a nearly nonexistent hand in. To a less extreme degree, adopted genres like cultivation, xianxia, and wuxia—originating from or inspired by Chinese works and culture—are also becoming popular, and there are plenty of other themes and takes borrowing from Japanese and Korean storytelling culture as well.

Another wonderful facet of self-publishing is the increased freedom of expression. Traditional publishing often moves slow; by comparison, many self-published authors put out novels at a greater pace than their trad counterparts, which is fantastic for voracious readers seeking to devour a series. More importantly, indie authors being their own handler means they can put out exactly what they want to put out and then place those stories directly into readers’ hands. The importance of this is in that it could help diversify the fantasy genre more quickly, which has been a concern for a while and recently in particular. That’s not to say the traditional side isn’t changing—because it thankfully is—but the simple truth is that a lion’s share of fantasy authors remains white and straight. Fantasy still also has a Eurocentric identity so well-established that it continues to reign as the genre’s foundation, and that identity trails a long way back to older works that are still being read today.

One thing self-publishing has done for certain, however, is allow more voices than ever before onto the stage, and it’s resulted in some wonderful work, like M. L. Wang’s Sword of Kaigen—you just have to go out there and give them a chance. And hey, that doesn’t just extend to cultural diversity, either. There are some really interesting branches of self-publishing out there too, such as web fictions like Worm, The Wandering Inn, and Mother of Learning. Some of these web fiction authors are thrilled to have nothing more than a large following of zealous fans, others have gained significant monetary support that differs from the usual selling of a book as a product, and some like Sarah Lin have successfully used a hybrid of both the web serial and novel medium. Heck, Sword of Kaigen was originally a serialized story before becoming the contest-winning and popular book that is now.

Self-publishing in particular is really maturing now after the past couple decades of growing pains. Indie authors are better supported than ever before, print-on-demand is viable and simple, many editors and artists have a much better understanding of the self-publishing industry’s specific needs, and reader support for indie books and authors increases with every year. Events like the Self-Published Fantasy Blog Off and Self-Published Fantasy Month continue to celebrate and highlight the indie side of things.

It all actually reminds me of creator communities like streamers and YouTubers. It’s easy to forget that, despite being such a normal part of today’s culture, they’ve evolved just as slowly over the past two decades and have had a lot of similar issues with legitimacy, finding a place in the entertainment world, and garnering professional support. Now they offer unique entertainment experiences you won’t find on traditional media and have entire businesses dedicated to them.

I honestly don’t think the parallels will end there. Self-published fantasy isn’t here to replace or take on traditional fantasy, but to grow and evolve alongside it. That all being said, a love of the genre alone is more than enough a reason to give some of the great self-published fantasy out there a try if you haven’t yet had a taste. 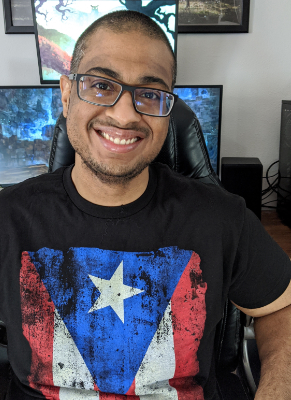 Bernie Anés Paz is a Puerto Rican fantasy author that writes Latinx-inspired settings and characters. You can usually find him devouring fantasy books and story-rich video games, visual/graphic novels, and anime whenever he’s not wordsmithing.

Bernie is also a former U.S. Army medic and spent most of his service time working in an ER, which he found to be an amazing and humbling experience. Before that, he worked for Dell, which helped spark his love for customizing tech and building computers. Bernie is currently writing fantasy novels and caring for doggies in Tigard, Oregon, and is loving every moment of it!

Enter to win a physical copy of Cradle of Sea & Soil by Bernie Anés Paz!
★ International ★